FREE SHIPPING ON ALL ORDERS! 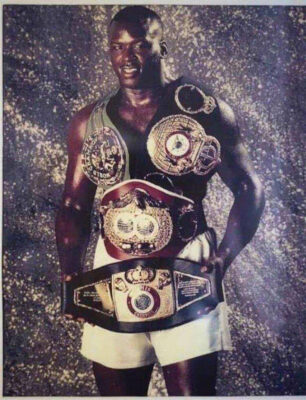 James “Buster” Douglas is a central Ohio native and former professional boxer. He was the undisputed world heavyweight champion in 1990 after defeating Mike Tyson to win the Title.

His victory over Mike Tyson is regarded as one of the greatest upsets in sports history.

Buster was a 42-1 underdog going into the Tyson fight. Tyson was undefeated and considered to be the best boxer in history at that point in his career. Buster was the reigning champion until defeated by Evander Holyfield.

Unbeknownst to many, Buster was a high school and collegiate basketball star taking Linden-McKinley High School to a State Championship in 1977. Buster continued his basketball career at Coffeyville Community College where he was inducted into the Coffeyville Men’s basketball Hall of Fame.

However, beyond all of these sports accolades Buster is most proud of giving back to his community as he now runs the Thompson Recreational Center boxing program for the City of Columbus.

Every step from plant to final product is important – our hemp is grown in the USA and each farmer uses our seeds, our extraction process uses CO2 to remove the CBD oil from the plant, and then formulated into the final product. Each step is done with the highest attention to quality to produce the cleanest, and most effective CBD product.

*These statements have not been evaluated by the Food & Drug Administration.
These products are not intended to diagnose, treat, cure or prevent any disease.